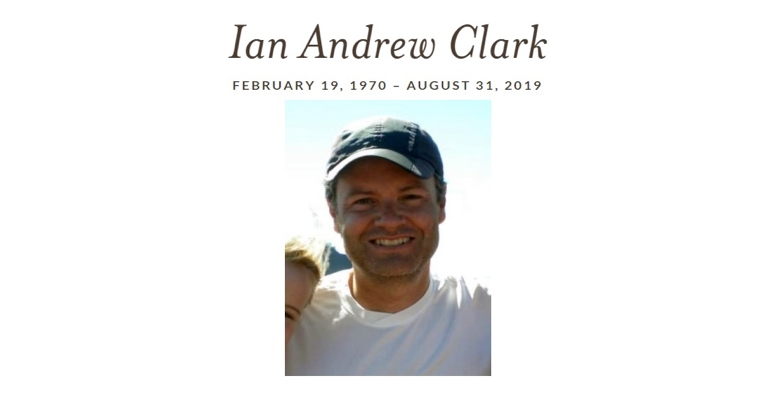 Clark, Ian Andrew, 49, of Halifax, passed away on August 31, 2019. Born on February 19, 1970, Ian was the son of the late Andrew and May Clark, both of whom he was very close. Ian is survived by his loving wife, Kim, and beautiful children, Kara and Jocelyn, as well as faithful dog, Dexter. Ian was a lifelong resident of Wedgewood Park and attended Grosvenor Wentworth Park School and Halifax West High School. He then enrolled in Dalhousie University and graduated in 1993 with degrees in Physical Education and Education respectively. While at Dalhousie, Ian was a member of the Varsity Soccer Team for five years, winning a bronze medal at the Canadian Interuniversity Athletic Union national championships in his final year. Ian also played on the 1989 Nova Scotia Canada Games Soccer Team and Halifax King of Donair Soccer Club that became the first club team from Nova Scotia to win a national championship in 2001.

For their efforts, Ian and his teammates were inducted into the Nova Scotia Sports Hall of Fame in 2012. Ian coached many school and club teams over the years. Most recently, he took great pleasure in helping to coach Kara’s team for the past three years. Ian was employed as a teacher, first at Astral Drive Junior High and then Graham Creighton Junior High. In 2006, Ian graduated from Acadia University with a Masters in Education in Counselling. He then worked as the school counsellor at Eastern Passage Education Centre before transferring to Fairview Junior High in 2017. In his position, Ian did his best to help young people and their families navigate the challenges of life.

After soccer, Ian took up several outdoor adventure sports, most notably orienteering. In 2008, he won a bronze medal at the Canadian Orienteering Championships in his age category. He later went on to be named the 2014 and 2015 Orienteering Association of Nova Scotia Male Athlete of the Year. Here he also tried to give back by volunteering on the OANS Executive Board in various roles and by becoming an event director, and by organizing meets so that others could participate. Ian considered himself very fortunate to be a part of some very successful teams; however, what he appreciated most about his involvement in sports was the opportunity to make countless lifelong friendships, with both teammates and competitors alike.

While Ian enjoyed sports and his profession, he loved nothing more than spending time with his family. He and Kim were together 25 years, during which time Kara and Jocelyn were born. Ian and Kim loved to travel together with the girls, whether it be abroad or closer to home camping at Keji. Ian simply loved playing with Kara and Jocelyn, attending their activities, and watching them grow.

With great appreciation for the Quality World involvement with Ian as be became involved in The William Glasser Institute in counselling  training that was part of his journey towards a M.Ed. Counselling at Acadia University and service to the youth of his school communities.

We carry with us the Spirit of those who make a difference in our lives, creating a better world wherever

their hearts and minds go . . . and so will be eternally grateful for the presence of Ian in my Life and in the lives of so many others.

I met Ian on several occasions and he called me up to discuss becoming a school counsellor. We had many conversations over the years about Reality Therapy as a counselling model but, more importantly, Ian displayed his passion towards Dr. Glasser’s ideas and implemented them not only in his work but also in his personal life.

We met a few times when he came to Moncton for training or to attend a conference. He was super excited to meet Dr. Glasser for the first time. He called me to tell me about the wonderful discussion that he and Dr. Glasser had about Quality Schools. Ian wanted me to know that Dr. Glasser had told him that if he wanted to know any more about Choice Theory™ or Reality Therapy™, he should contact Maureen McIntosh or Ken Pierce in Canada because they really knew it and understood. Ian was so happy to be able to share that with me.

His family was more important to him than anything else. He loved talking about his children. We talked in general about how much understanding Choice Theory™ really helped in our personal lives and in our relationships. Ian was a one of a kind, a gentle soul whom we shall sadly miss. We sat together the last time we both saw Dr. Glasser in Los Angeles. Ian was so happy to have made that trip. Sending love to his family and friends who, I am sure, are missing him.

Ian Clark was such a joy: welcoming smile,  generous loving nature, curious about learning new ideas, creative and innovative in applying what he learned, and contributing to the quality of students’ lives. I worked with him as his instructor and later when he became a Supervisor with The William Glasser Institute, I worked with him as a colleague.
I recall what I believe to be a humourous story when Ian encouraged a Grade 7 class to read Dr. Glasser’s book, Every Student Can Succeed since the WGI – Canada was interested and had begun to translate this book into French. We, who knew and loved Dr. Glasser, understood that his genius was making the complex simple. If we closed our eyes, and someone were reading any paragraph or section of any of his books, we could imagine our mentor sitting on the stage, speaking with us in a conversational way. Well, Grade 7 students, at that time, were immersed in grammar, spelling and, in some districts, even analyzing sentences. What? No u in harbor or in neighbor!  Did subject and predicate agree?

Ian encouraged his students to write to Dr. Glasser asking him all kinds of questions about their observations not only about syntax but also about the ideas. Ian and I delighted in Ian’s telling of the story. Sure enough, one day in speaking with Dr Glasser, I learned that he did, indeed, answer Ian’s students and taught them that there are even languages in the world that do not have the full 26 letters in the alphabet! So, did it really matter? This is the Ian I remember: quick-witted, thirsty for more ideas related to how students learn in his pursuit of brain-based teaching and learning, dedicated, loyal, committed, and always one to keep his word. I shall miss him. May God bless him and may his family find peace in knowing how he contributed in making the world a better place!

If you would like to make a memorial donation please consider KidSport Nova Scotia, the Activating Cancer Care through an Exercise Strategy for Survivors program (ACCESS), or a charity of your choice. To donate to ACCESS, please go to: https://qe2foundation.ca and click on ”Donate” and make your selections. Under “How may we use your donation, select: “For a specific area or purpose,” and in the “For a specific area” box please type ACCESS. For a full obituary please go to: www.jasnowfuneralhome.com